Canada Authorities Unable To Seize BTC Donations Of The Convoy

The Canada authorities have a hard time seizing BTC donations that were made to the Freedom Convoy after they raised 21 BTC but the governemnt only managed to seize 6 so let’s read more in today’s latest BTC news.

Though the Canadian government brought protests against vaccine mandates to an end in Ottawa, the Bitcoins that aimed to finance the protests keep on pouring in. That is because about $880,000 worth of peer-to-peer donations seems to have slipped through the government’s fingers. Last month, Prime Minister Justin Trudeau invoked Canada’s Emergency Act and granted the government power to freeze the bank accounts involved with donations to the protest. This way right after the crowdfunding platform GoFundMe was pressed to return $10 million in donations back to the donors but other platforms popped up to help but the Canada authorities have a hard time seizing in all the funds. 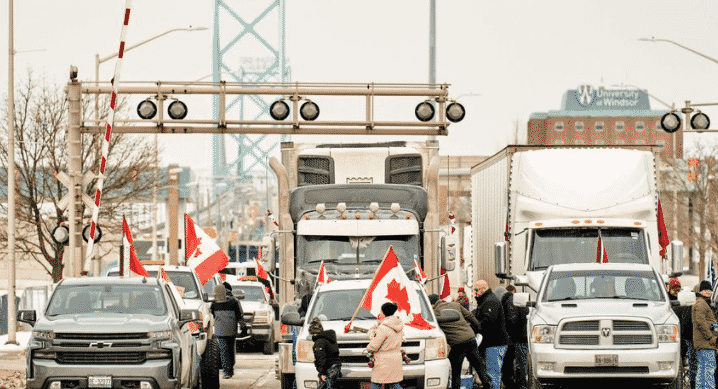 The “bitcoin for Truckers” fundraiser proves much more difficult to stop. The Ontario Supreme Court ordered owners of the multi-sig wallet controlling the donated BTC to freeze the holdings and another 122 different crypto addresses while the multi-sig wallet requires multiple people’s authorization to start a transaction. One member of the wallet was “bitcoin team lead” Nichols St. Louis who is known as Nobody Caribou on Twitter. The CBDC reported that 14.6 BTC of the total 20.8 had already been distributed to 101 separate, unidentified wallets at the time of writing.

There were the wallets that St Louis recorded handing out to the truckers in batches of 0.144 BTC at the time worth nearly $6400 each. CBC also reported that roughly 5.9 of the remaining BTC were seized by authorities.

As recently reported, The Canadian government’s efforts to cut the flow of funds to protesting truckers in Canada shows why exactly cryptocurrencies exist, according to Ethereum founder Vitalik Buterin. In an interview, at the ETH Denver Conference, Buterin who grew up in Canada didn’t condone the truckers who are protesting on the streets of Ottawa saying that they have been blaring their horns in opposition to the COVID-19 restrictions. He did say that the government’s response to the protests was quite heavy-handed. Vitalik Buterin called Canada’s protestor policies dangerous as they want to cut off the funds from the banks to those that protest and basically cut out the financial livelihoods without due process which is basically an example of why the decentralized technology is there to make this more difficult. In this way, crypto is not a radical technology but a restorative one.

Coinsquare Exec On Being First Regulated Crypto Exchange In Canada

Canada’s regulator penalized exchanges ByBit and Kucoin for security law violations and as a result,