No. 1 NFL Draft Pick Trevor Lawrence has reportedly converted his entire signing bonus to cryptocurrencies via crypto firm Blockfolio. Lawrence is the top overall pick in the 2021 National Football League. His signing bonus is estimated to be around $24 million.

Clemson quarterback Trevor Lawrence was selected No. 1 overall in the 2021 NFL Draft by the Jacksonville Jaguars on Thursday night.

The 6-foot-6, 220-pounder has partnered with crypto management and trading platform Blockfolio where has reportedly converted his sign-on bonus to cryptocurrencies. Lawrence tweeted last week: “Pumped to announce I’ve joined Blockfolio. Excited to help bring these two worlds together.” He also said:

When it comes to my crypto portfolio, I wanted a long-term partner in the space that I could trust. 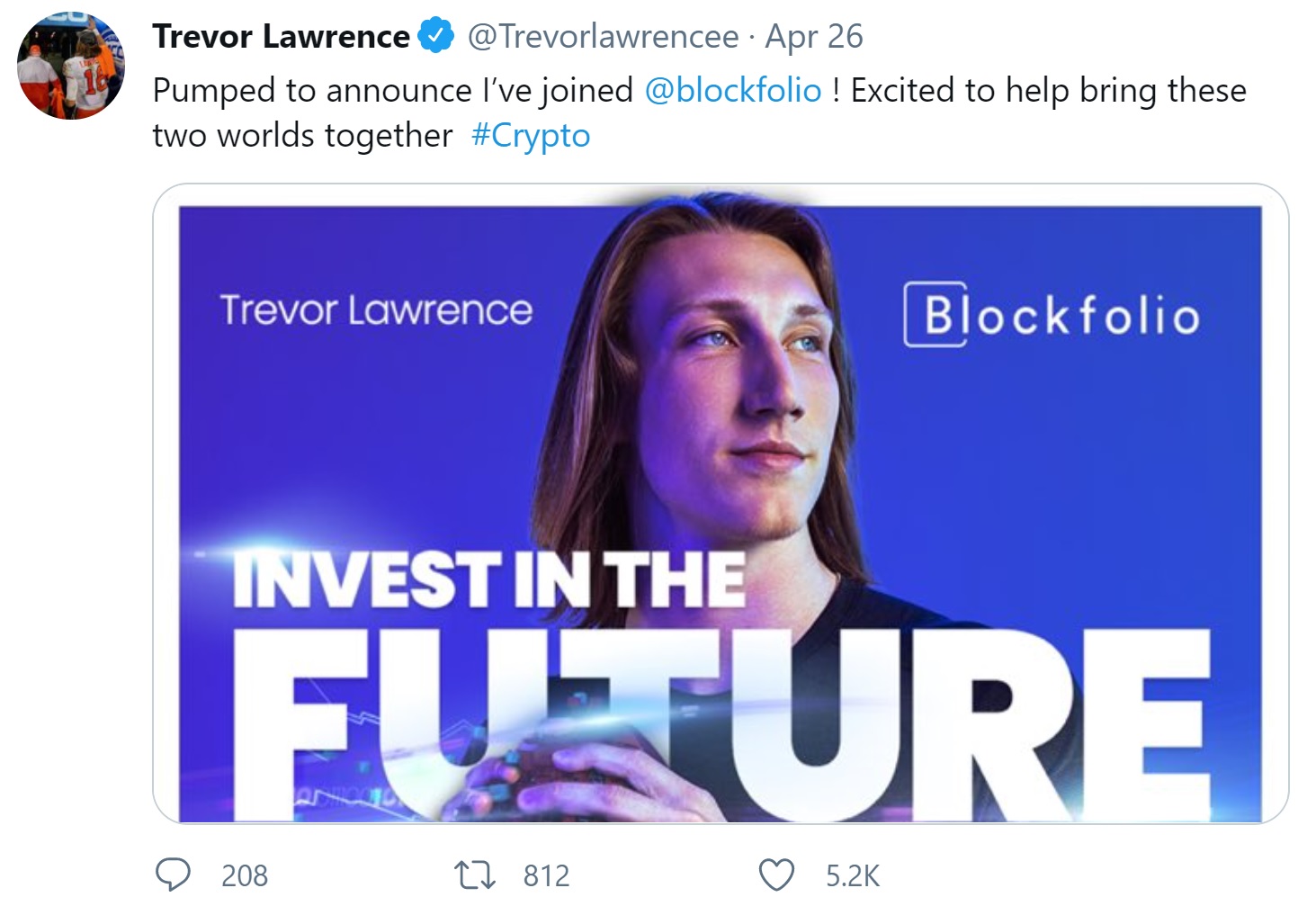 According to Dealbook, “The quarterback’s first payment was made exclusively in crypto tokens transferred directly into his Blockfolio account.” While the company did not disclose the terms of the agreement, a spokesman noted that Lawrence’s signing bonus “was already worth more on Sunday than when it was deposited on Friday night.” The publication added that “Future payments will be made in whatever combination of dollars and crypto Lawrence chooses.”

While the amount of Lawrence’s sign-on bonus was not disclosed, Spotrac estimates it to be $24.1 million.

In addition, Sam Bankman-Fried, CEO of cryptocurrency exchange FTX which acquired Blockfolio last year, tweeted Thursday: “Congrats on being the #1 pick Trevor Lawrence. We’ve got a surprise for you — check your Blockfolio account for $25k of SOL. Tonight is on crypto, thanks to you.”

A growing number of professional athletes have chosen to get paid in bitcoin. Following Russell Okung who converted half of his $13-million salary to BTC, NFL player for Kansas City Chiefs Sean Culkin converted 100% of his salary to bitcoin. Earlier this month, the NBA Team Sacramento Kings said it will offer players the option of getting paid in the cryptocurrency.

What do you think about Trevor Lawrence converting his singing bonus to cryptocurrencies? Let us know in the comments section below.

Vietnam is treading waters into the cryptocurrency industry, as the government recently commissioned a research