Traders panic on a technical flaw that allows people to spend the crypto unit twice which led the cryptocurrency below the $30,000 price range, so let’s read more in today’s bitcoin news.

According to BitMEX Research, the BTC blockchain detected a small double spend of about 0.00062063 and the claim prompted the community to see vulnerabilities in the public ledger system of Bitcoin and a 51% attack allows miners to take control of the network. The fears subsided later as Paolo Ardoino, the BitMEX CTO clarified that a double-spend event didn’t occur. He explained that “what happened is that two blocks were mined simultaneously” which eventually led to a chain reorganization:

“[It] did not result in double-spending.”

Bitcoin is holding its bullish bias above its 21-WMA wave. Source BTCUSD on TradingView.com

In the meantime, the cost to buy one BTC dropped by about 9 percent thanks to the traders panic momentum and hit $28,372 on the Coinbase US Exchange. Other factors include the prevailing bearish correction sentiment as well as the profit-taking behavior that contributed to the slide. The crash was brief because BTC increased quickly and touched levels above $30,000 hinting at a renewed demand for the crypto near the said price floor. The BTC/USD exchange rate reached above $30,000 as well, surpassing $31,700 in a pre-trading London Session.

Analysts noted that BTC has better chances of continuing the retracement thanks to the bullish divergence pattern and once an asset price moves lower, the momentum goes upward. This usually signals that the bearish traders are leading the price crash and now are gradually losing power. Scott Melker the author of Wolf Den Newsletter said:

“Beautiful dragonfly/hammer on the 4-hour [chart]. Potential bull div coming out of oversold. I’ve seen worse reversal signs, even if only temporary.” 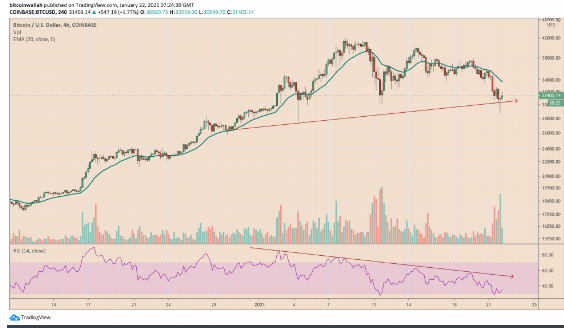 Bitcoin forms a bullish divergence between its price and the Relative Strength Indicator. Source BTCUSD on TradingView.com

BTC underwent a similar retracement rally of about 49 percent as it closed above $30,000 in the first week of January. The cryptocurrency seems to have formed a substantial support area around the same level and proving it with a stronger bounce back. Crypto market analyst Jebb McAfee recalled the BTC tendency to undergo deeper downside correction after setting up new record highs over history. He explained that the 21-week exponential moving average is ideal long-term support adding that it will keep the pair in bullish territory. The 21-WMA is sitting near $22,000 which is not scary according to Jebb, adding that it provides more buying opportunities in the long-term.