The price of bitcoin jumped significantly on Wednesday after the payment processor Paypal announced cryptocurrency support. The jump in value has pushed a large number of bitcoin holders into a state of profit, according to Glassnode “percent of UTXOs in profit” statistics. Based on the current data, 98% of all bitcoin UTXOs are in a state of profit touching levels previously recorded three years ago in December 2017.

The price of bitcoin (BTC) closed at a high at $13,184 per coin on Wednesday, October 21 following the announcement from Paypal. During the evening trading sessions, the onchain research and analysis firm Glassnode tweeted about the number of bitcoin unspent transaction outputs (UTXOs) in profit. A UTXO refers to the amount of bitcoin someone holds that has not been spent and is simply stored in a bitcoin wallet.

“98% of all bitcoin UTXOs are currently in a state of profit,” Glassnode tweeted. “A level not seen since Dec 2017, and typical in previous BTC bull markets.” 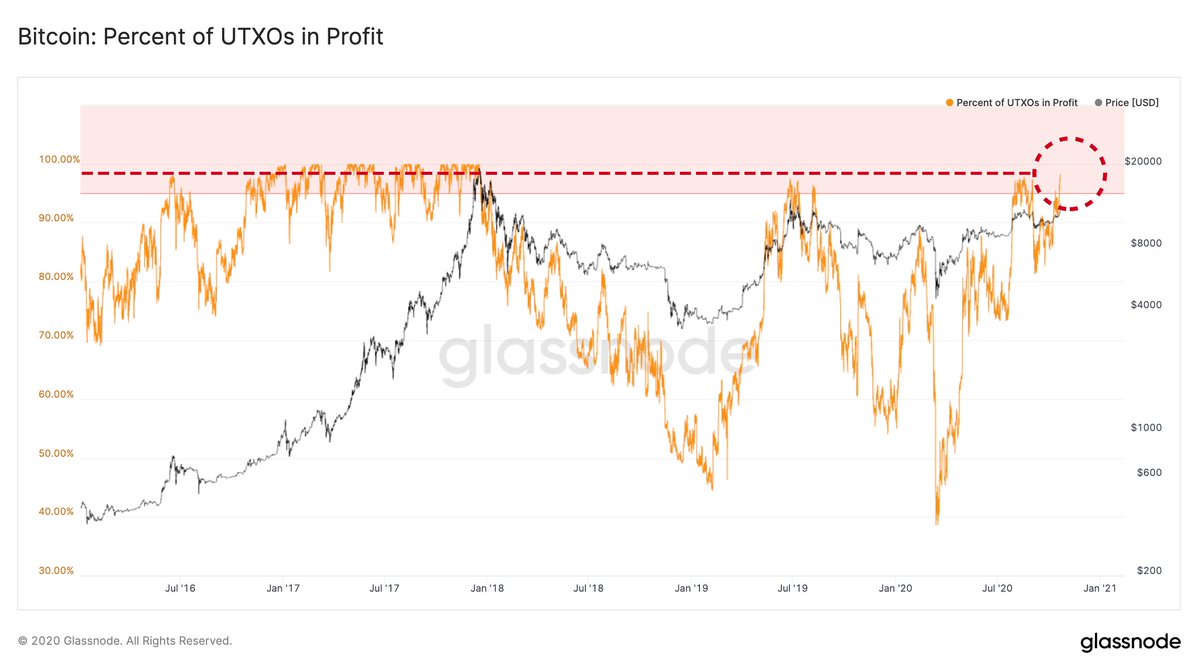 Since then the price has dropped a hair but the price of bitcoin (BTC) is still up 4.3% over the last seven days. Long term holders have seen a 72.4% increase during the last 12 months, 34.9% during the last 90-days and 22% against the 30-day span. Glassnode’s onchain stats report, details that the subindex measuring investor “sentiment” increased ending the week “at 70 points.”

“At current levels, Bitcoin is testing cyclical highs,” Kuptsikevich wrote in a note to investors. “Since the beginning of 2018, it has not been able to gain a foothold at levels above $12,000. It is equally important that at new highs, indicators like the RSI are far from the overbought condition, indicating significant potential for further growth. Closing the week above $12,800 would be the highest level in two and a half years, opening a direct path of growth to the historic highs of $20,000 that we saw three years ago.”

Bitcoin breaking through two round levels of $12k and $13k opens doors for further growth. The current price dynamics led the coin to re-test the peak of July 2019, which at that time was the highest point of the rally. Nowadays, purchases take place against the background of confidence that bitcoin has more and more supporters in the traditional financial world.

Eric Demuth, cofounder and CEO of Bitpanda believes that cryptocurrencies, in general, started to “establish themselves as a trusted asset class of the worldwide financial market such as gold and stocks.” Demuth thinks that the Paypal support announced on Wednesday is just the start, as he believes more large players will be joining the crypto party.

“2020 has shown that crypto is here to stay,” Demuth explained. “There has been a huge inflow of institutional capital as well as record numbers of new retail customers adopting cryptocurrencies. I am certain we will see more big players like Paypal joining the party in 2021.”

What do you think about the high percentage of bitcoin UTXOs in a state of profit? Let us know what you think in the comments section below.