The Spanish Prosecution office says it is investigating Arbistar for allegedly running a bitcoin trading scam with preliminary findings suggesting $1 billion in investors’ funds cannot be accounted for. The disappearance of investor funds has affected 32,000 families that are failing to access their savings that are invested with Arbistar, a bitcoin trading platform.

Now according to Spanish media reports, the police in Tenerife, where Aribistar has its tax headquarters, has “already opened investigations into the company.” The police also want to “know the destination of the (missing) funds.”

Meanwhile, some of the investors affected by Arbistar’s freezing of accounts insist the bitcoin trading platform is a pyramid scam. Nevertheless, the director and owner of Arbistar, Santiago Fuentes disputes this characterization as he defends the blockade on investor accounts:

It is just a computer error that we have to settle, liquidate and continue with our businesses.

Fuentes, who earned the nickname “Spanish Madoff” after his prosecution and subsequent acquittal in another scam case, agrees that about 32,000 families are affected. Interestingly, Fuentes confirms that he is in hiding at an undisclosed location in Tenerife for “security reasons.” However, he denies accusations that he has disappeared.

Finally, Fuentes says he hopes that the scheduled launch of Arbistar 2.0 will “ensure those affected will recover their investment in six or twelve months.”.

Meanwhile, in another twist to the story, one blockchain intelligence firm, Whitestream claimed it has uncovered “massive withdrawals from Arbistar Ponzi wallets into Wirex and Coinbase.” This occurred in February. 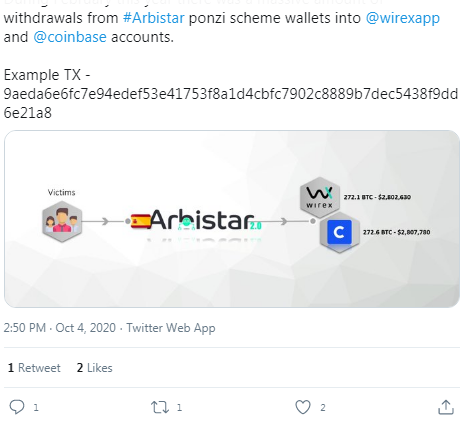 The blockchain intelligence firm’s CEO, Itsik Levy tells News.bitcoin that after analyzing Arbistar activity on the Blockchain, they determined that: 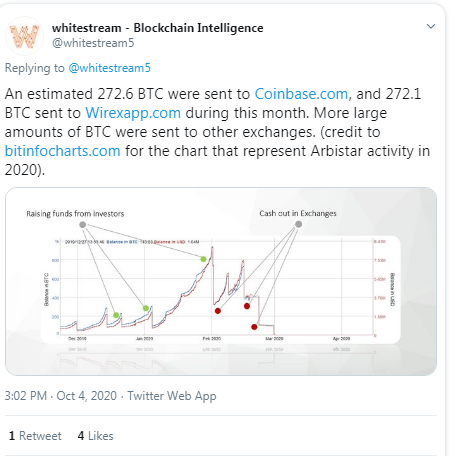 Still, the CEO says they “are currently analyzing the new wallet structure of the company in order to understand where the lost funds are.”

What do you think of Fuentes’ remarks about the missing bitcoins? Share your views in the comments section below.