The EOS whales prepare for another major price movement now that the hype around Bitcoin’s halving is over. The on-chain metrics for the coin reveal that the larger investors are adding more amounts of EOS as we are reading further in the EOS news. The social engagement metrics for the coin are through the roof and the number of addresses with 100,000 to 10,000,000 EOS started increasing. The on-chain activity suggests that EOS is poised for volatility but this could not be the direction that most expected. Some of the larger investors seem to have been accumulating EOS over the past few months which suggested another major price move is coming. EOS Social Volume by Santiment The data from Santiment reveals that since April, the social activity for EOS has been experiencing multiple spikes in levels that were not seen for more than a year. Over the first quarter of 2020, the number of EOS mentions across multiple social media channels reached an average value of 50. The social engagement metrics also surged in April to a score of 416. Some major players also started accumulating this action at the same time.

The number of addresses with 100,000 to 1,000,000 EOS doubled since mid-February. In the meantime, the EOS whales holding 1,000,000 to 10,000,000 EOS has increased by 22 percent in the same timeframe. The type of behavior indicates that EOS could be preparing to push the price further on the upside before it can find another level to dump the holdings on new investors. The optimal price level for them cannot be determined but the technicals sure help paint a better picture. EOS is one of the top cryptocurrencies by market cap which was not able to recover fully from the losses during the March crash. The cryptocurrency is still down by 18 percent since the Black Thursday. The slow upward price action could not be encouraging to some of the investors but others see it as a great possibility to enter the market as the coin could continue growing. This coincides with the forecast presented by the TD sequential indicator on the 1-day chart. 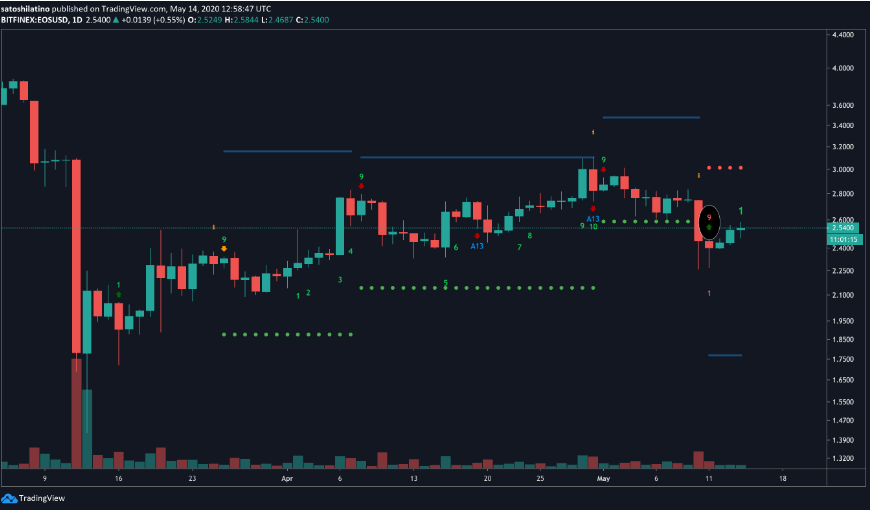 The crypto market seems bullish now that Bitcoin added another halving event. Since then, BTC is up by more than 21 percent which indicates that it could have been the catalyst for the new bull market.
Receive the latest Crypto Regulatory and Legal News via LinkedIn or Twitter: