It appears Bitcoin is a demographic megatrend in Canada according to the details of a recently published study by the country’s central bank. The survey is reportedly part of the Bank of Canada’s plan to examine the risks posed by virtual currencies on the country’s current financial system.

Commissioned in 2016, the Bank of Canada “Bitcoin Omnibus Survey” shows a significant level of Bitcoin interest in the country. Figures from the study show a steady increase in the Bitcoin awareness level of participants across the three years of the survey. 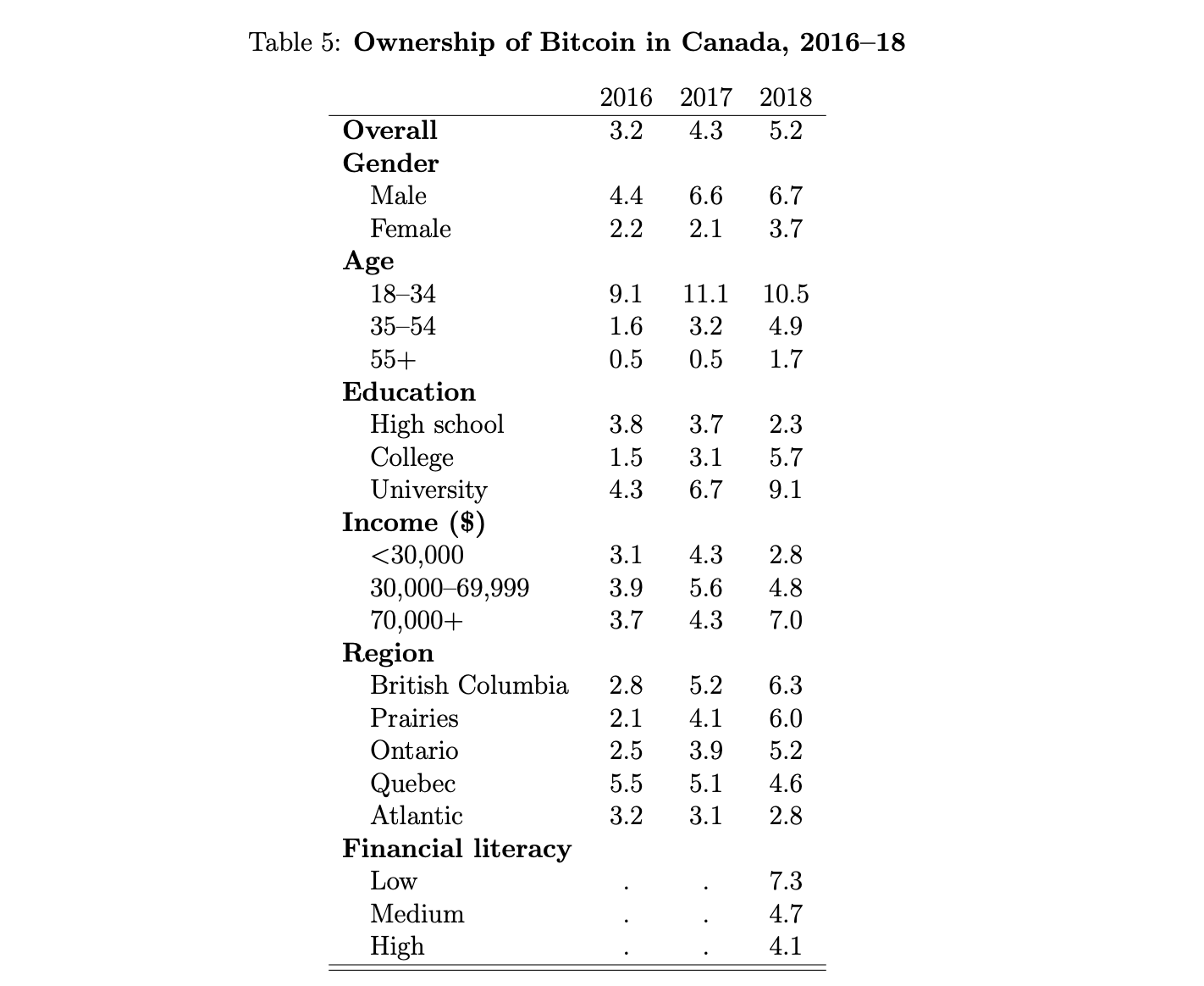 The study also investigated the demographic composition of Bitcoin ownership in Canada which revealed mass appeal for the top-ranked crypto across gender and age categories. Usually, it is common for these types of studies to have BTC ownership skewered in favor of millennials who are arguably more interested in digital technology.

Details from the study show that respondents who were college-educated males between the ages of 18-34, earning more than $70,000 had the highest Bitcoin ownership figures.

Bitcoin Popular as a Store of Value in Canada

On the subject of why Canadians chose to own BTC, the study looked at the utilization of BTC as either a medium of exchange or a store of value. While there was some observable increase in the use of BTC to pay for goods and services, the survey showed that a majority of participants saw BTC a store of value.

Rising from 6% in 2016, 40% of the participants in 2018 identified store of value as their reason for owning Bitcoin. The jury is still out as to whether BTC does satisfy the requirements for being a stable store of value. However, some commentators say the lack of correlation between BTC and mainstream assets makes it a valuable hedge against uncertainties in the stock market.

The Bank of Canada survey did show a massive sell-off between 2017 and 2018 likely due to the year-long bear market that characterized the 2018 crypto scene. BTC has since gained more than 150% since dipping as low as $3,000 in December 2018.

The survey also acknowledged the rampant cases of cryptocurrency fraud in the country. As previously reported by Blockonomi, Einstein — a popular Bitcoin exchange has been seized by authorities in British Columbia.

Reports indicate that the exchange owes more than $12 million to its customers. The Einstein exchange news comes on the heel of the ongoing QuadrigaCX imbroglio and the return of the platform’s missing funds.

Back in 2018, another crypto exchange-related issue also rocked the Canadian cryptocurrency scene with reports suggesting that MapleChange had suffered a hack to the tune of $5 million. In the wake of these failing crypto exchange platforms, regulators in Canada have declared their intention to create more robust regulations for the industry.

Apart from exchanges, crypto-related fraud has also spread to the Bitcoin ATM scene. Back in June 2019, authorities in Vancouver led a crackdown on Bitcoin ATMs in efforts to combat money laundering. This news highlighted the severity of the issue given that Vancouver was the location of the world’s first-ever Bitcoin ATM.