According to sources familiar with the matter, WeChat’s management has made revisions to its payment policy. The updated policy mentions that “merchants may not engage in illegal transactions such as [those involving] virtual currencies.” WeChat’s notice also states that companies or individuals trying to promote or conduct crypto token sales will have their accounts suspended. WeChat users are also prohibited from uploading and exchanging pornographic images. 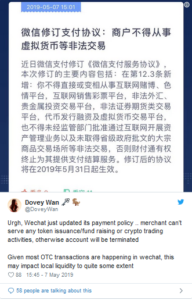 WeChat’s notice also states that companies or individuals trying to promote or conduct crypto token sales will have their accounts suspended. WeChat users are also prohibited from uploading and exchanging pornographic images.

Online gambling (or gambling in general in China) is also not allowed on the social media network.

As confirmed by local sources, the ban on cryptocurrency-related activity on WeChat will be effective starting May 31st, 2019.

WeChat’s Management “Probably Had No Choice”

Commenting on the matter, Changpeng Zhao, CEO of Binance, the world’s largest digital asset exchange in terms of trading volume, said that WeChat’s management “probably had no choice” as they may have been pressurized by the Chinese government to prohibit crypto transactions. 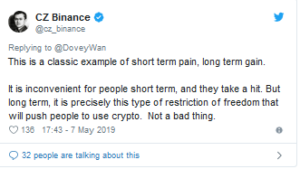 Zhao, or “CZ”, added that “it would be hard to beat WeChat pay,” when it comes to processing payments in a quick and cost-effective manner. He also noted that WeChat has a good UX/UI and had not placed too many restrictions on the types of activities allowed on its platform – until recently banning cryptocurrencies.

As confirmed by Dovey Wan, the founding partner at Primitive Ventures (a “market agnostic” investment firm which has invested undisclosed amounts in Dfinity, the “world computer” project, ZCash (ZEC), among other cryptos), WeChat is a widely-used network for settling over-the-counter (OTC) transactions in China.

Wan also mentioned that the ban on cryptocurrencies could potentially have a negative impact liquidity pools in mainland China.

In September 2018, Lincoln Townley, a UK-born self-taught contemporary artist, had sold a large collection of his artwork for cryptocurrency through WeChat.

The Chinese government is well-known for censoring and also completely blocking most major websites including Facebook, Google, and YouTube. The ban is enforced through the Great Firewall of China, which is constantly updated in order to restrict access to internet sites that may interfere with the nation’s economic and political system.

How Taper Talk, Repos, China And U.S. Legislation Are Impacting The Bitcoin Market

Watch This Episode On YouTube Listen To This Episode: In this episode of Bitcoin Magazine’s