Britain’s financial regulatory body has had some pressure taken off its shoulders as the downturn in the value of bitcoin and other digital assets signaled a reduction in the threat cryptos could pose to the British financial system, per a Reuters report.

Last year, the world witnessed a crypto explosion, as digital assets like bitcoin and ethereum saw astronomical increases in their value. Bitcoin particularly had a good year in 2017, reaching a record high just under $20,000 the week before Christmas. This increase in value sparked a worldwide debate, with different countries coming out with varying cryptocurrency regulations, in a bid to stem the craze. 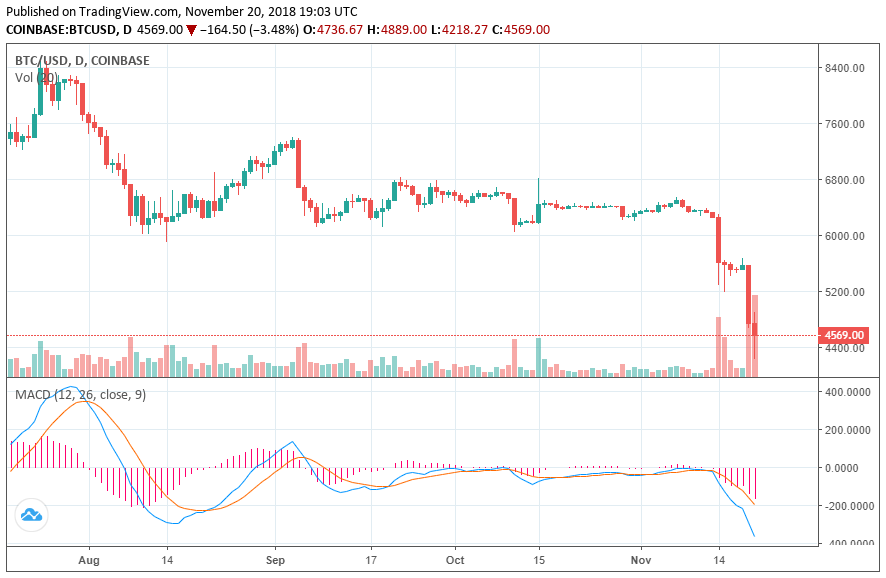 However, 2018 has been something of a different song entirely. Cryptoassets have been trading below their 2017 values, setting new lows throughout the past week. At press time, bitcoin is currently trading around the $4,500 level while ethereum is valued near $135. The fall in prices seems to have been aided by a reduction in daily volume as investors are not really incentivized to buy, and it seems to have also eased the pressure on the British regulatory body to take any further action to stem the once-hot crypto craze.

Speaking at a City & Financial conference, Gillian Dorner, Deputy Director for Financial Services at the British Ministry of Finance, was quoted by Reuters saying:

“We want to take the time to look at that in a bit more depth and make sure we take a proportionate approach.”

That statement marks a notable shift in tone from previous comments that regulators had made on the state of the crypto market. Earlier this year, the Bank of England issued a warning of an imminent crackdown on bitcoin and other cryptocurrencies, citing that these “inherently risky” currencies failed to fulfill their basic obligations as money and alternative forms of legal tender.

Just last month, a task force formed with representatives from the Ministry of Finance, the Bank of England, and the Financial Conduct Authority (FCA), recommended a ban on the retail sale of derivative products linked to cryptocurrencies.

However, things seem to have eased up a bit, and promise to remain that way unless the market takes an unexpectedly feverish turn. In the meantime, Christopher Woolard, the Executive Director for Strategy and Competition at the FCA, said the agency would by the end of the year examine the “grey edges” around the current regulatory framework.

Get Exclusive Crypto Analysis by Professional Traders and Investors on Hacked.com. Sign up now and get the first month for free. Click here!Advertisement

UK Regulators Prohibit Binance, What’s Ahead For The Crypto Exchange?